Visual Change Management: Turning your journey into an illustrated epic

Ever heard of the epic of Gilgamesh? One of the world’s oldest stories, it follows the king of Sumeria as he embarks on a quest to find the secret of immortality to save his best friend. It’s a tale of love, jealousy, friendship, but most importantly, change. The ancient tale was found carved into stone tablets, but text wasn’t just all that those brave archeologists found. Within the ancient library, explorers discovered carvings illustrations that accompanied each momentous event in the epic.

Change is a constant in any organisation – whether you’re an NGO, corporation, start-up or even an ancient middle-eastern kingdom. As a leader, visual communication could be the deciding factor between a successful quest, and a tragic end. So, why not take a lesson from ancient Babylon and use the power of illustration and visual roadmaps to turn your change management journey into a change management epic? Here are some tips on how to use visuals and illustration to make change management a little more engaging.

Nothing beats a good visual story

Gilgamesh’ epic is…well, epic! But its long-lasting heritage doesn’t just come from the story itself. Illustrations of Gilgamesh and his trials can be found everywhere in Sumerian ruins – painted on pots, carved into walls and as reliefs on stone tablets. It seems that the ancients had a pretty good idea of what made a story of change easy to communicate.

Gilgamesh’ quest had a clear itinerary, leading him from one place to the next in a logical order. In fact, only because he followed a clear route was he able to survive until the end of his tale.

In a context of transition, illustrations can help you activate employees’ commitment by presenting information in a way that engages their senses.Illustrations are perfect for simplifying, linking and grouping different concepts. Using illustrations highlights how each initiative is related to the other and how they are linked to your end goal. Because the fresco and illustrations are structured visually, it becomes easier for individuals to structure the same information in their mind. By visualising key concepts and linking them together, you will be able to get employees to invest in and understand change on a much deeper level.

MIT Sloan reached out to us to upgrade their Algorithmic Business Thinking (ABT) course into a 6-week course that was not only understandable, but also engaging for students. Of course, as you may have guessed, we harnessed the power of illustrations. Their ABT course challenged us to really understand the course material so we could find the perfect visual to make the concepts and the connection between them all crystal clear. 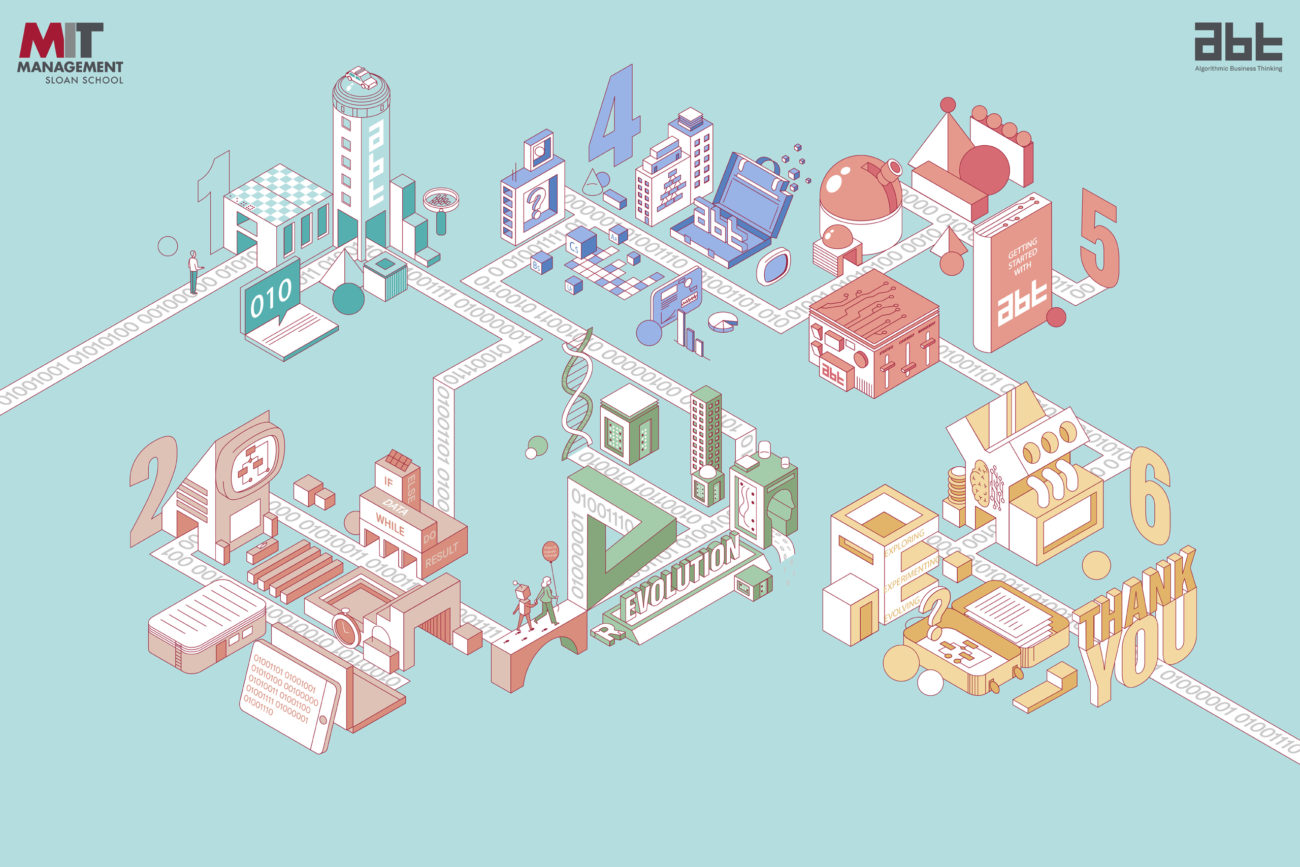 A universal way to understand

One challenge in managing change is that every employee will have a different level of understanding of what you want to achieve. Some will be highly engaged while others will, at first, be disinterested. Visuals can be used to create a universal language that everyone can understand. For example, you can create visuals that depict the benefits of change, pain points that need to be addressed, or key milestones that need to be reached. You can even create inclusive visuals that get every employee to think of themselves as part of the team working together towards a common goal.

When it comes to solidifying that understanding, nothing works better than a visual roadmap. 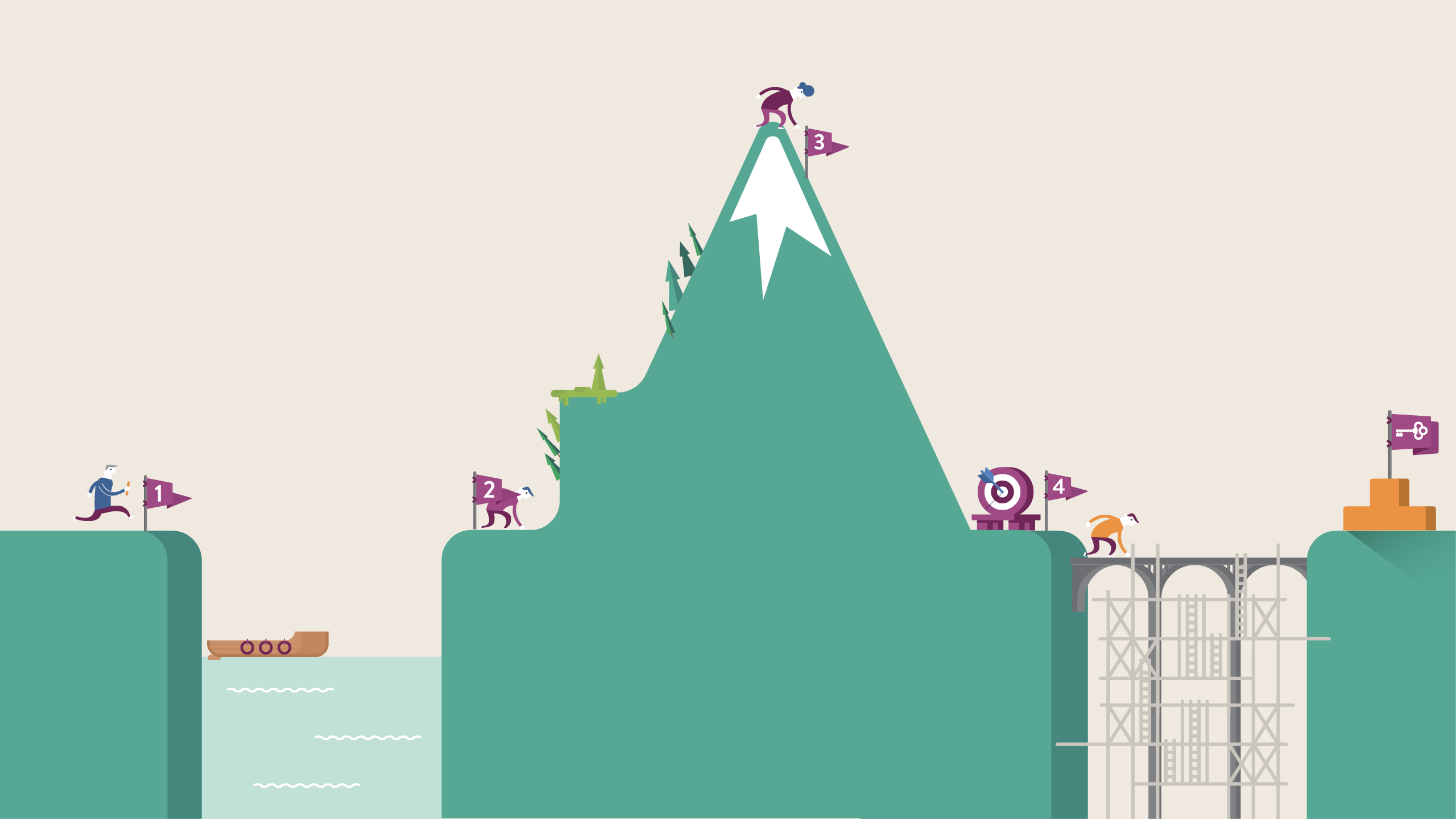 A crystal-clear journey to change

Use a visual roadmap

One of the best ways to support change is to use a visual roadmap. A roadmap is a great tool for communicating your transition. It will help you engage employees during the process – making your vision clear and concrete to all. A roadmap is a fresco that depicts a timeline with major milestones and change activities. By integrating fun and exciting visuals, you can make your roadmap really stand out. This way, you show a clear sequence of milestones, with a visual thread throughout the change process.

Your roadmap will be the main visual that supports the change process from its conception, to its creation and roll-out. It structures management’s vision to establish the best communication plan. It helps them keep an eye on the ongoing development of the change management journey and is a powerful tool to making the logic and milestones of the transition understandable for employees. A roadmap can evolve and change, but it will always be your main guide throughout your journey.

The visual aspect of your roadmap helps break up the change management journey into smaller goals that are easier to achieve. Just like chapters in Gilgamesh’s epic, splitting your transformation process into tangible pieces gives your employees a clear overview of the transition.

An important element to keep in mind when creating a roadmap is that it should be tailored to your audience. A roadmap used to communicate to stakeholders should be different from one that is used by employees. The former should be designed to keep track of the rollout of the change, while the latter wants to get people excited for and involved with the change.

Solvay was reinventing their way of working and needed our help to give this journey a visual identity that felt distinct, while still being uniquely Solvay. Cartoonbase worked with them to help them in their transition process – the digitalisation of the company.

Before creating the numerous visuals, Cartoonbase started with a deep dive into Solvay’s vision. Through discussion groups and workshops, a roadmap was developed. This roadmap was created to make sense of the different projects that needed to take place – bringing clarity and helping communicate the journey ahead.

It was designed to give key stakeholders a strategic overview and make the change process tangible. It was also key to supporting employees: explaining the milestones that needed to be hit. 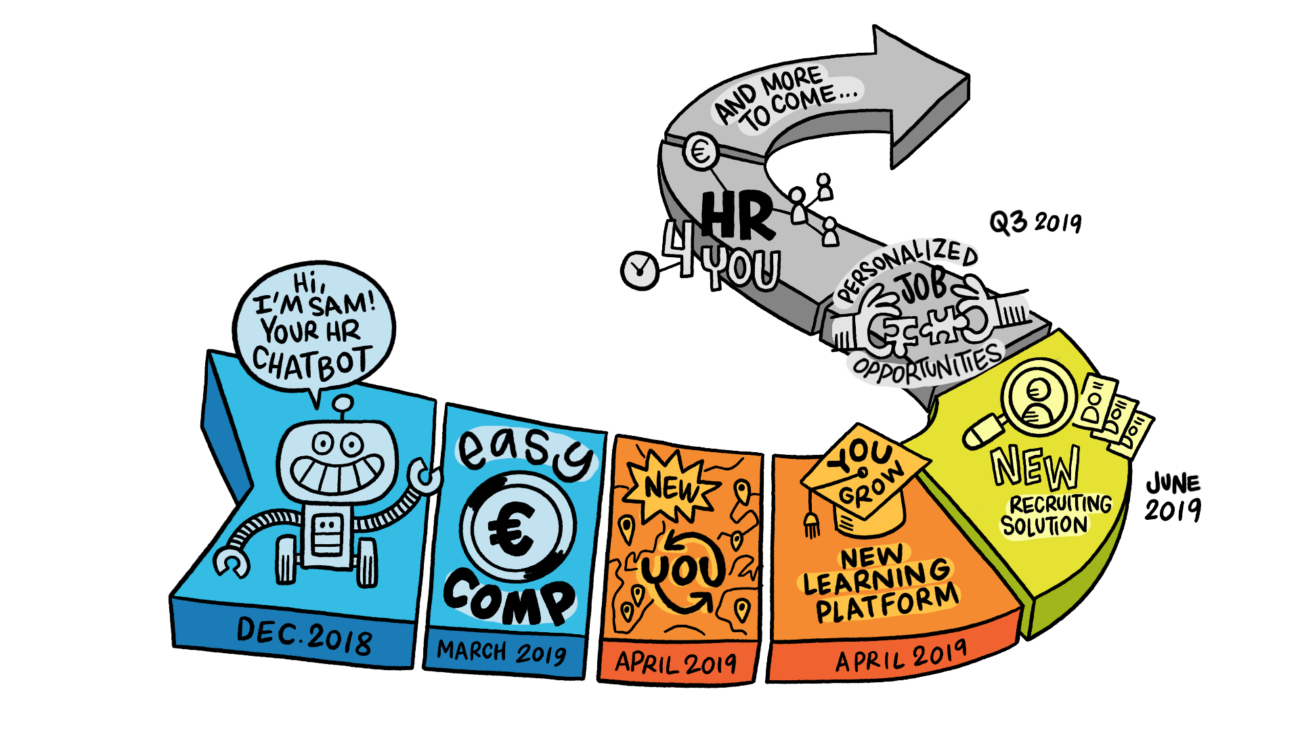 That’s just the tip of the iceberg for our collaboration with Solvay. Read the full case study here.

Before stories were written down, they were spoken – in halls, around campfires, in the safety of a house. Stories were engaging because you, the audience, would always feel involved. We don’t tell our saga’s the way we did back then, but new technologies allow for new ways of interactive storytelling.

Representing your change management journey visually also allows you to engage your audience in new ways. The very best examples are interactive, including all kinds of hidden elements that can be collapsed, expanded, animated and moved in a way that keeps people interested throughout their interactions.

Renault was in the middle of a massive strategic transformation they referred to as the ‘Renaulution’. The Revolution was an ambitious paradigm shift focused on crafting the Factory of the Future: a factory focussed on sustainability – keeping cars on the road instead of simply replacing them. This resulted in materials filled to the brim with illustrations that spring off the page, and culminated in an interactive roadmap that displayed how they were going to Renaulutionise their ways of production.

As you are changing, you will have to present a lot of information to employees, stakeholders and the general public. You will have to communicate progress, results, new initiatives and benefits. Through it all, it is important to show the end product visually. What is the end state of your change management journey? How will your product or service be delivered impact employees, clients and the community. Doing so creates a north star that will keep everyone on track with a clear goal. 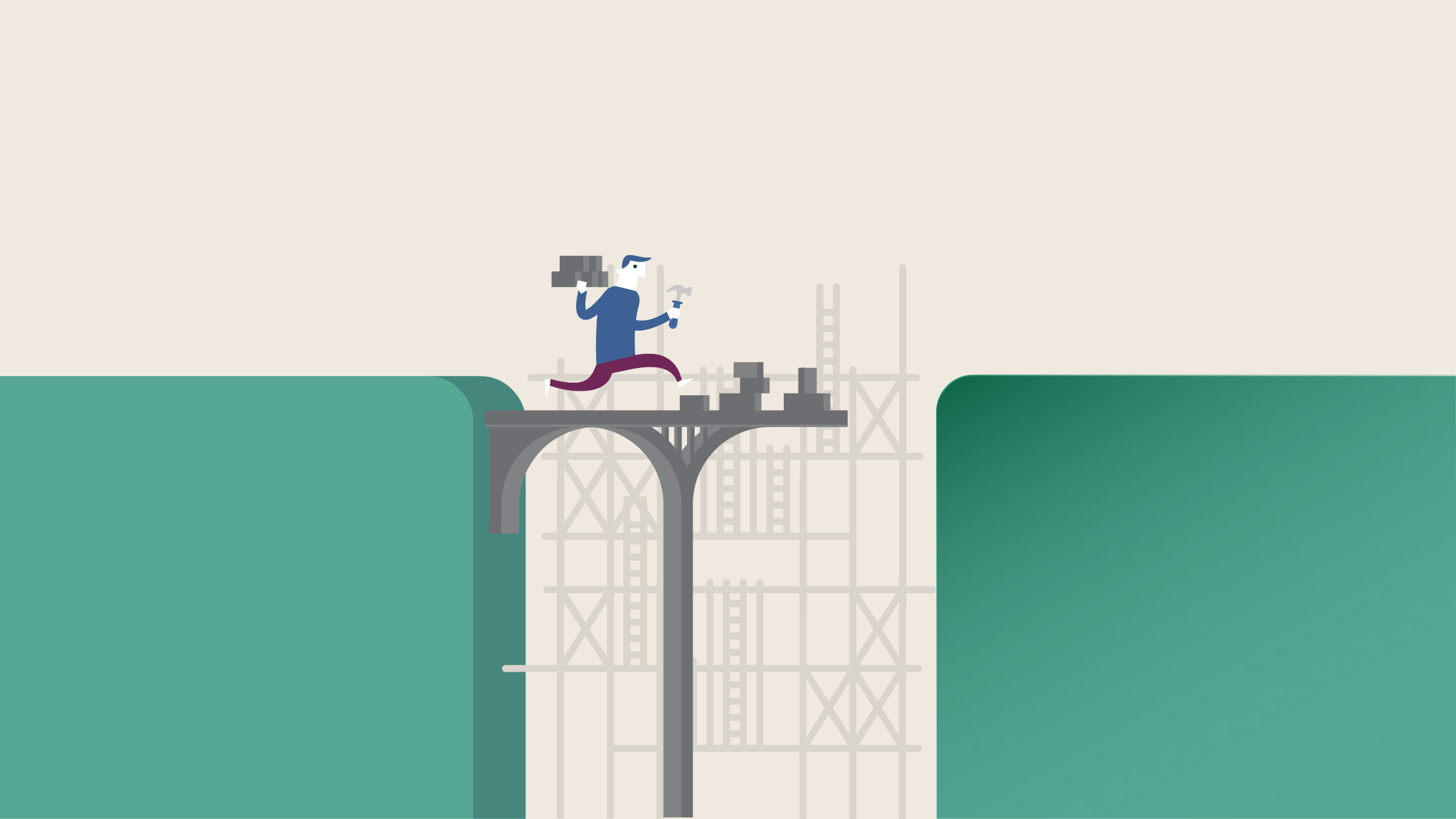 Getting started on your visual journey

As we’ve seen, employing visuals in storytelling helps structure and communicate your tale, and help you get people involved. By working out a visual roadmap, and making it interactive, you can make your change management saga one that will be remembered. Move over Gilgamesh, there’s a new hero in town.

For more information on a tailored approach to your change management journey, reach out to us here.